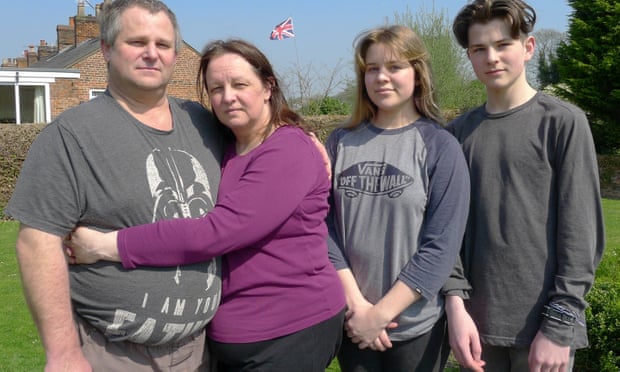 On 17 December last year, Paige Smith stood on a bridge above a road in north London. “I don’t remember too much, just standing there, looking over the edge, thinking ‘I’m just going to jump’, but then two police officers – I don’t know where they came from – managed to talk me down.”

Smith, 24, had been left suicidal by the Kafkaesque nightmare in which she and her Albanian fiance, Fatjon Ballmi, 23, had found themselves since becoming engaged.

Last September, having been together for nearly three years, they applied for a fiance visa for Ballmi but, two months later, the Home Office refused, stating, incorrectly, that Smith did not meet the £18,600 income thresholdnecessary to bring her partner into the country, a requirement introduced in 2012 by Theresa May, who was then home secretary.

“We never expected a refusal and I took it quite badly,” Smith said. “I was suffering mentally, having been away from my fiance for 11 weeks in total and I tried to commit suicide. I was sectioned, taken to hospital and stayed there for just under 24 hours before they let me go.”

The Home Office had lost a crucial payslip proving that Smith met the criteria. “The payslip was sent to them four times including from my solicitor and MP. The joke of it is they had my bank statements and access to HMRC to see how much I get paid.”

An appeal judge took less than 10 minutes in June to rule that the visa should be issued. The Home Office took another two months to confirm that it would not appeal.

“Everyone says ‘you’re a British citizen so you’ll have no problem’ when actually you do. But I’m yet to meet a British citizen who has an Albanian spouse who hasn’t had a problem. I think certain nationalities are extremely discriminated against when it comes to getting a visa. I guess it’s part of the hostile environment. I know mistakes happen and it’s a big government department but it seems to be happening far too often.”

Smith is one of about 1,000 members on the Reuniting Families Facebook page who can testify to the problems tens of thousands of British nationals are experiencing when trying to bring their non-EU spouses and dependants into the UK.

“Mothers, fathers, husbands and wives are being torn apart because the Home Office doesn’t treat them as people with individual circumstances and needs,” said Ciaran Price of the Migrants Resource Centre. “It doesn’t seem to matter if your family has lived here for many years, or you have a seriously ill child, or, like 40% of the population, you don’t have a secure job that pays well enough to let you marry the person you fell in love with.”

In January, Becky Darmon, 22, a British citizen from Norfolk, applied for her Moroccan fiance, Abderrahman Belafi, 26, an English language teacher, to come over on a tourist visa so he could be at the birth of their daughter, Alia.“I had over £5,000 in the bank to support him and we’d booked the return flight,” Darmon said. “I know they say not to but if you don’t they say there’s no proof he’s going home.”

Their application was rejected when Darmon was 33 weeks pregnant. “They said there was no proof he could afford the flight back home, even though we’d given them the ticket.”

What little Belafi has seen of his daughter, born two weeks early after an emergency C-section and with very low iron levels that have resulted in her being subjected to blood transfusions, is via his phone.

Darmon, who cannot juggle a job and care for her sick child, said: “To get her daddy over I need to be working 40-plus hours a week. But then, she’s not only going to have her daddy in Morocco, she’s going to have me at work all day so she’ll be left with a stranger. How’s that in the best interest of our child?”

Troy Gent, 45, a British citizen who manages an engineering firm, has been married to Louise, 43, a South African, for 23 years. They have a daughter, Chelsy, 18, and a son Cadin, 13. The family, who live in Cheshire, has been waiting for three years to be granted permanent residency. “We could understand if we’d overstayed, but Louise and the kids came here on a settlement visa,” Gent said. “We didn’t hide the fact we wanted to make the UK our permanent residency.”

Initially, the couple filled in the wrong application form. However, they made three separate applications using the correct form and have spent more than £20,000 in legal bills and visa fees. “It’s become quite apparent that the Home Office is discriminating against British citizens that are married to foreigners,” Gent said.

Benjamin Page, a British citizen and his husband, Brian, a US citizen and architectural technician, who live in Milton Keynes, came to the UK in November 2014 when Benjamin’s mother developed a terminal illness. Married in the US, the pair sought to extend Brian’s stay in the UK under an extreme circumstances application, but this was rejected.

Since then the Home Office has held on to Brian’s passport, meaning he cannot return to the US. Benjamin, having outstayed his US visa, something that carries an automatic 10-year ban, cannot return to the US either. They estimate they have spent up to £12,000 in fees and lawyers’ bills trying to resolve the impasse. “We’re both on antidepressants,” Brian said. “It’s almost like they’re trying to make us destitute.”

A Home Office spokesman said several factors were considered when setting fees. “All UK visa applications are considered on their individual merits and in line with UK immigration rules,” he said.